Fast Fourier transform (FFT), an efficient technique to perform discrete Fourier transform (DFT), is the most important block in the signal processing domain. FFT is used to convert a signal in time domain to its frequency domain. On the other hand, inverse FFT (IFFT) block is used to convert the signal in frequency domain to time domain. The evaluation technique of FFT and IFFT is very similar and thus it is required to perform both the operations by a single processor. In this work, an Efficient FPGA Implementation of 1024-point FFT/IFFT Processor is reported.

. This processor is based on Radix-2 decimation in frequency (DIF) technique to implement FFT algorithm. In this design, the input samples are in order but the output samples are not in order. Signal flow diagram for a basic 16-point Radix-2 FFT is shown in Figure 1.

In an N-point FFT block, n is used to represent the number of stages where

. In this signal flow diagram shown above, there are

stages and it can be seen that the input samples are in order. Similar way, in case of 1024-point FFT there will be total 10 stages. In this work, a fully parallel and also pipelined design for 1024-point FFT/IFFT processor is presented. This processor is hardware efficient, fast and also storage efficient.

The FFT/IFFT processor data path is shown in Figure 2. All the stages from stage 1 to stage 2 are identical but stage 9 and stage 10 are different. The only difference between stage 1 and stage 2 is that mux unit (MU) is not present in case of stage 1. The processing element (PE) block is same in stage 1 to stage 8. FFT operation is performed when

signal is high and IFFT operation is performed when

signal is low. The

) are the control signals to select the elements from the MU.

Processing element is the major part of any stage of the processor. This block is mainly responsible for the complex arithmetic operations. The block diagram of the processing element (PE) is shown in Figure 3. The PE block consists of a complex multiplier (CM) block and a complex butterfly (CB) blocks. All the necessary pipeline registers are inserted at suitable positions. The block diagram of the CB block is shown in Figure 4. A simple block diagram of the CB block is used here which has two adders and two subtracters. The schematic of the CM block is shown in Figure 5. CM block is also based on the simple circuit and no efforts have been made to optimize it. Though there is a low power version of the CM block is available, this simple block is used here. This block needs one extra multiplier compared to the low power version.

The processing element 1 (PE1) block is different and hardware efficient than the previously discussed PE block. This is because no multiplication is required in the 9th stage. Only controlled inversion of the input data is enough. The schematic of the PE2 block is shown in Figure 6. Here, CB block is same as it was for PE block. But the CM block is replaced with a hardware efficient sub block (SB). The schematic of the SB block is shown in Figure 7. SB block consists of two add/sub blocks and two multiplexers. The add/sub blocks are used for inversion depending on the control signal

signal selects from the multiplexers. The frequency of the

signal is half of the frequency of the clock signal.

The MU block selects the samples which are output of the processing elements or the line buffers. The schematic of the MU is shown below in Figure 8. This MU blocks have control signal

depending on the position of the MU blocks. The phase diagrams for the

signals are shown in the Figure 9.

clock cycles. It can be said that the total latency of this processor for

. Further optimization can be done in this processor by optimizing the processing element block but not done in this work to keep the architecture simple. 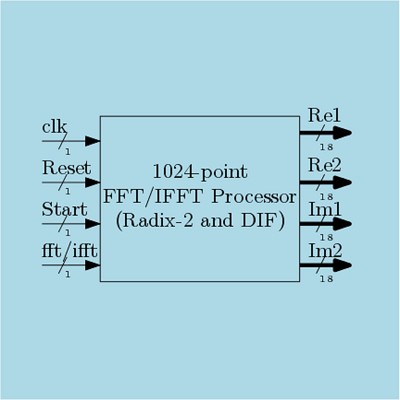