In insertion sort technique, values from the unsorted part is inserted at the correct position of the sorted part. Two data elements are sorted in similar way as it was done previously but the BN block is different from the BN block discussed in previous tutorials. Architecture of this BN block is shown in Figure 1. Maximum of two elements is stored in a register and again fed to the comparator. One

signal is there to clear the contents of the registers as per requirement.

number of BN blocks are used. Serial data is fed to the

block sorts two data and maximum of them is

. The minimum value from the

block is passed to the next block through a MUX. If a data greater than the present value of

occurs at input of

then this value will be assigned to

and the past value of

is passed to the next BN block. Similar operation is carried out for the other BN blocks. After the

holds the maximum of

The next job is to sort the

net. The unsorted elements are again sorted serially using the same block. After

holds the maximum value of the unsorted part. This way the whole array of

elements at a time. Apart from the MUX and registers, the sorting processor mainly consists of

BN blocks. If the value of

is to be increased, the number of BN blocks will increase. The timing complexity of this sort processor can be estimated by expressing

. Then total timing complexity will be

. If the value of 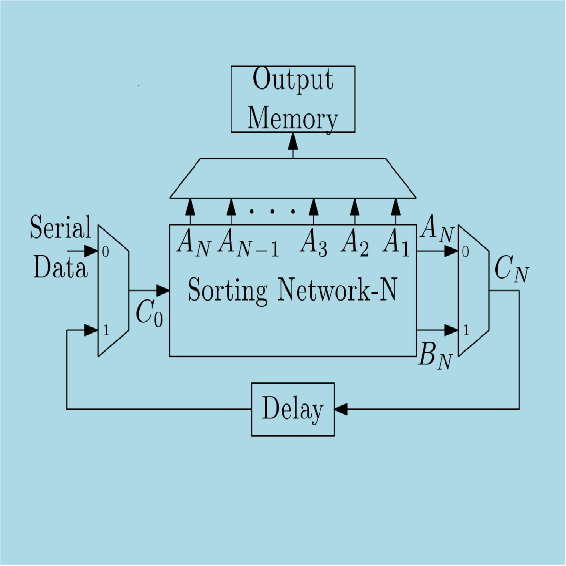