A numerically controlled oscillator (NCO) is used for on-chip generation of major signals like cosine, sine, linear frequency modulated (LFM), Gaussian etc. in system on chips (SoCs). These signals can be generated by two ways, either by analog circuitry or by digital circuitry. In a digital system, these signals are generated using numerically controlled oscillator (NCO) and then they are converted by an digital to analog converter (DAC).

An NCO block is a digital counter part of an analog oscillator circuit. There are two types of NCO designs available. In one type of NCO block, sinusoidal values are computed by a dedicated hardware like coordinate rotation digital computer (CORDIC). In another type of NCO block, a look up table (LUT) is used to store a sinusoidal signal of fundamental frequency (

is the length of the signal and it varies from 1 to 1024 in this design. The cosine signal of fundamental frequency (

) can be obtained by putting

in equation (1). This cosine signal of fundamental frequency (

) is stored in a LUT. Other cosine signals with frequencies

etc. can be generated easily from the stored cosine signal. The fundamental cosine signal is shown in Figure 1.

The cosine signal with fundamental frequency (

) can be stored in the LUT in three ways. Either by storing the whole length of the signal, or storing half of the signal, or by storing only one fourth of the cosine signal. This is possible due to symmetric and antisymmetric property of the cosine pulse. The third option is chosen here to design the NCO as to reduce the memory storage elements from

Sinusoidal signals of different frequencies can be easily generated if the whole fundamental cosine signal is stored in LUT. But it is difficult to generate cosine signals if only

elements of fundamental cosine signal is stored. The variable

varies from 1 to N and

can be varied from 0 to

signal is used to get 180 degree out of phase cosine signals. Algorithm to generate sinusoidal signal is very similar to Algorithm 1.

Architecture of the Numerically Controlled Oscillator

denotes the required period of the waveform,

pulse starts the NCO and a pulse at

input can stop the NCO. Two types of signal generation are possible with this NCO, one is sine and another is cosine. The type of the signal is given at

pulse indicates that the waveform is getting out of the NCO block. NCO outputs the wave form through the

signal and it is of 18-bit width. The

signal when delayed by two clock cycles, indicates the end of a cycle. If only one cycle is required then

signal can be connected to the

The architecture of the NCO block is very simple and it is shown in Figure 3. The

) and then if the required phase count is reached, another pulse is generated which starts the row counter (

). Then the row counter starts counting and it counts upto

. The output of the row counter and the input

. Value of these constants for sinusoidal signal generation are

The multiplexers are used to generate the correct address locations for the LUT. The control signals for the multiplexers are generated from the control signal generator (CSG) block. At the last stage, an inverter is placed to invert the output of the LUT when it is required. This inverter is implemented by a adder/subtracter block. The output of the NCO is of 18-bit as many designs uses 18-bit data width.

The NCO block is implemented using the XILINX ISE EDA software. The simulation results are shown in Figure 4 and 5. In the Figure 4, it is shown that the cosine signal is generated when the

signal is asserted. Here no phase shift is given. In Figure 5, the value of the

signal asserted. Precision of the NCO block is of 10-bit as most of the designs are using this precision.

Generation of signals with frequency difference

is also possible when

is 128, the frequency of the fundamental signal is

, the frequency of the second signal is

, and so on. Thus we can get complete cosine signal when

. This scenario is shown in Figure 6 for

is very useful in generating atoms of sampling matrix in compressed sensing.

In this work, efficient design of a LUT based NCO block is discussed. The NCO block is hardware efficient in terms of memory elements as it stores only one fourth part of the fundamental cosine signal. This NCO block has the capability to generate both sine or cosine signals. Signals can be phase shifted by any phase from 1 to

. This block is also capable of generating 180 degree out of phase signals without delaying. Besides generating sine or cosine signals of frequency difference

, this NCO block is also capable of generating signals with frequency difference

. The proposed design of NCO is scalable thus can be used in any complex digital system easily. 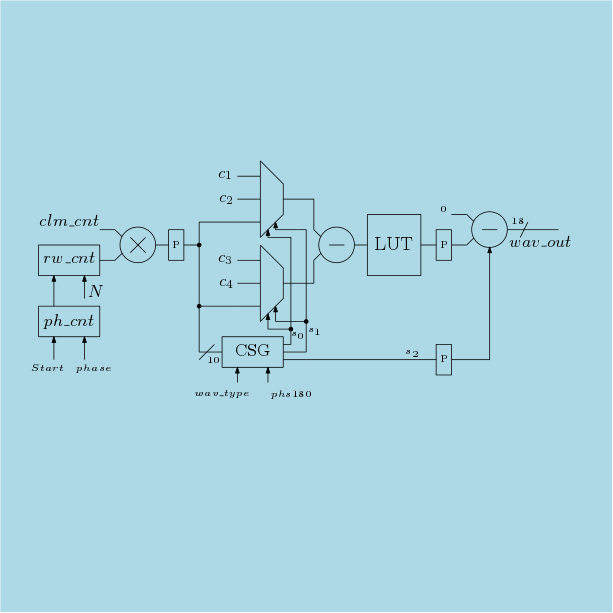